ONTO THE WEAVER FOR EASTER 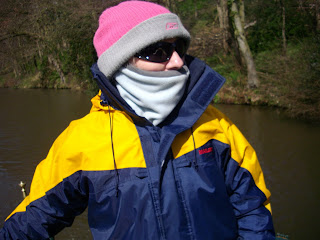 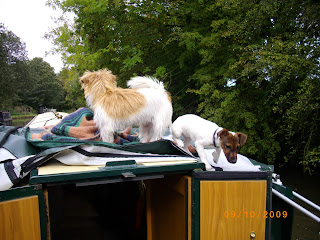 Had a lovely day yesterday, weather lovely and so nice to be relaxing after the last few days. Left Barnton and headed to Anderton once there went to bool in but nothing until 3.15 that was 3hrs away but it's so lovely to not be annoyed at the wait, to be in a totally different frame of mind when your on your boat and just relax an go with the flow...we wandered down to the waterpoint and filled up, emptyed the cassette and got chatting, as you do. Before we knew it it was time to depart. Everything went smoothly and we moored up on the weaver just before saltersford lock. The weather was just on the change and we were told it's going to be 8degrees below next week....that just makes me think of warm cosy fires. Or extra CLOTHING....big day tomorrow, officially moving aboard....Yippee
Posted by Unknown at 15:30 No comments:

Why do people mess you around so much. 3 weeks ago we had viewers and they haggled for England, agreed a price then didn't get in touch for 2 weeks, came back haggled again and vanished for another week, rang and asked if they could come and see us, haggled again, Tim was ready to kill by this time but we reached an agreement shook hands exchanged details and breathed a sigh of relief.
Lunchtime today, phone call, more haggling so I told them to forget the whole thing and go away. They turned on their tails and agreed on the hand shake the night before.

Lets just say were not expecting this to run smoothly and think they will leave their next haggle till the very last minute.
Posted by Unknown at 14:17 2 comments: 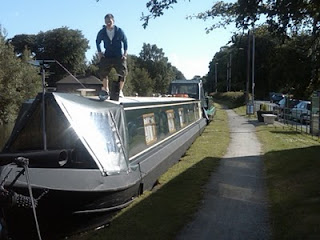 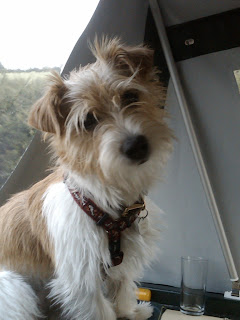 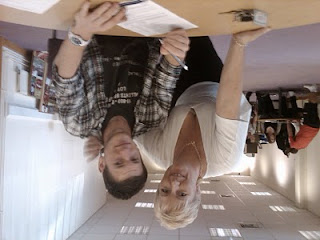 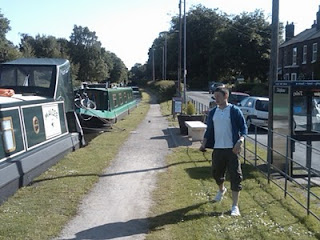 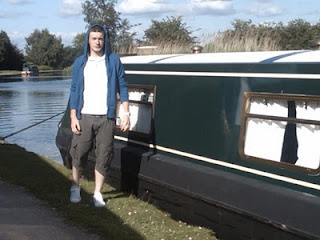 Some pics wit the boat named Maizee and Maizee showing her cute pose, don't know how Matt and I ended p upside down cos we didn't start like that.
Posted by Unknown at 02:52 No comments:

Labels: mat boat and Maizee dog. and me upside down 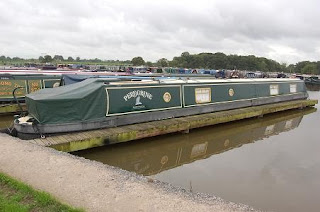 this is peregrine at swanley marina before she moved to Harral for sale
Posted by Unknown at 02:49 No comments:

Labels: Peregrins before we bought her...

where were up to now.

Well, still the house is for sale, just about getting my second eldest son packed off to his dad's, He's a footballer by the way, plays for Crewe Alexandra. you can google him...Matt Tootle... sorry for the plug...And we have taken the youngest out of school to home teach...that should be a laugh in itself..
WE have been so frustrated at still being here that by the end of this month no matter what we are moving aboard.. I have finished my driving school business and our party business can work alongside living aboard until the house sells. If it hasn't sold by the end of the summer we are going to rent it out and finish work completely at the end of December......Here's to the future.

I would just like to add what a wonderful experience everything has been, even at the worst points the stress isn't anything like in day to day life..talking stress Tim is having an angiogram this Wednesday so I am hoping that will get him sorted though we both think its the tablets causing the problems and if nothing comes of this he is talking about stopping all the tablets and getting on with life
Posted by Unknown at 02:35 No comments:

Life after the Marina

Well it was a little hasty we thought at first as things didn't go to plan and we are still actually in the house nearly 10 months on. We have been moving the now called Maizee around in an official way ever since and it hasn't been as difficult as we thought it would be. We have become members of BMBC Runcorn and met some lovely people, enjoyed their company on there cruises and nights at the club and discovered things i and around Runcorn that we would never have seen if not on the boat. We have had beautiful holidays, only saddened by having to get back and so needing to move on when you want to stay somewhere. I fell in when it was pitch black trying to get to the Ariel I screamed Tiiiiimmmm as i went then quietly said Oh it's ok as i landed on a ledge with the water below my knees!!!!! Did suffer a bad shoulder injury though as i tried to cling onto something and its still troubling me now 7 months on.
We have got a Pram Cover...great... a new wooden floor as the carpet became a mess. A generator, new batteries, new chairs...didn't like green...had the dining area recovered in leather so we can wipe muddy paw pints off, and are just waiting on the price of some welding as in front cratch seats/cupboards, filling in the back of the cruiser deck and having proper doors. and an extra ledge at the back for bikes.
Oh also we got another dog, short haired jack russell and her name is Millie.
Hence the new name MilliMaize.
Posted by Unknown at 02:19 No comments:

Once we felt calm we changed the boats name to MAIZEE our newly acquired long haired Jack Russell.
We settled in well at the Marina though it was a pain trying to get out. We didn't have a proper mooring and as such were on the wall at the far end and the wind always seemed to be pushing us back towards the wall. We became very good at going backwards as half the time this was the only way we could battle against the wind...on one occasion we were being directed as we moored up, us being the newbies, but unfortunately we were directed straight onto a tyre which kindly wrapped itself around the prop!!!
It took ages to sort out and i must say it was a woman that saved the day!! Me...
Sorry Gents, it just felt so good at the time....
We got onto a pontoon fairly quickly but after 6 months decided we wanted to move onboard and cruise so we left the Marina.
Posted by Unknown at 02:13 No comments:

Firstly i apologise for the gap in posts but life has been pretty hectic with hospital appointments and trying to sell up. However we picked Peregrine up and enjoyed our trip from Northwich to Runcorn even if we didn't have a clue what we were doing and as we approached preston Brook tunnel it was pitch black, outside i mean of course. We began to rush, we rushed through the tunnel, we rushed out of the tunnel and we rushed to the Marina, and we got shouted at!! Sorry, too fast past a boat... we made the turn into the Marina....too fast.... and nearly mounted the bank....Sorry, sounds so stupid now but even though your going slow as you think its still too blinkin' fast...
As we entered the Marina there was a friendly face waiting to help us moor up in the name of Bob, thanks Bob. We calmed down took everything in and just couldn't believe it had actually happened...Wow.
Posted by Unknown at 02:06 No comments: